A car to Bond with: 1974 Jensen Interceptor.

Let me start by saying that I am not much on imports.  However, there are plenty of imports out there I would do unspeakable things to own.  I would do mildly unspeakable things for this Jensen.  Then I would tell people I am a double agent and female spies would throw themselves at me in yachts and at fancy dinner parties. 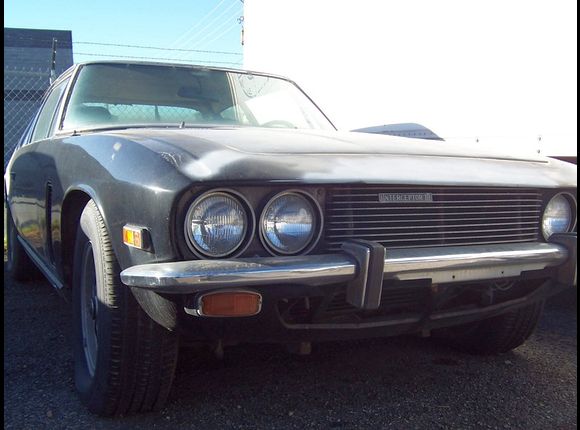 Hit the jump for more about this car – and to spy on the Russians.

It’s not the nicest car in town, and it pales in comparison to the Town and Country in an earlier entry, but there’s something about it.  It’s got a certain Euro-flair to it.  (It’s also got a 7.2l V8)    That 7.2l engine?  It’s a Chrysler 440.  Most likely, this car has the 727 Torqueflite trans backing it up.  So, other than interior parts you’ll likely have to fabricate and British wiring, this car should be relatively cheap to keep running.  Additionally, the seller claims it only has 50,216 original miles.

What it is, is Bond-esque.  It probably has an oil slick button, and hidden machine guns behind the headlights.  A revolving license plate?  Standard equipment.  You get all that for a mere $3,900

So let’s take stock:  It was built in England, but styled in Italy.  It has a huge American big block engine and an American transmission.  It falls between coupe and hatchback with 4 seats and a rear window that Jimmy Stewart wouldn’t believe.  The sum of these parts = awesome.  The only real question is, how did something like this ever come to exist?

One has to suppose it had something to do with the rampant drug use of the late 60’s and early 70’s.  Suits me fine.

[Note:  We liked this car so much we went and inspected it in person.  It has some major issues with rust.  It sat outside for 2 decades and the weatherstripping is shot.  Water got into the interior of the car and rusted out the floorboards, parts of the roof, and the trunk area.  Mechanically, it is totally complete, but the body is in bad shape.]

2 Responses to A car to Bond with: 1974 Jensen Interceptor.