Fishing for a deal? 1965 Rambler Marlin

Get it? Fishing? Hoo-boy!  See what I did there?

Here’s a car that has been on my list of things I need to own sometime in my life since I saw one for the first time in a junkyard in 1988. This one seems to be in better shape than the one from the junkyard. Being a craigslist ad, the photos are pretty poor, but for the $4000.00 asking price, it looks like it may be a deal.

Hit the jump for more on this car, and a bonus history lesson! 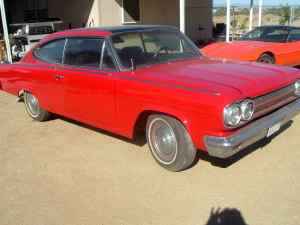 Odds are fair that you’ve never heard of the Marlin.  It was the brainchild of a flailing Rambler corporation on the verge of dying.  For years, Rambler was known for doing one thing well: Making cheap, basic transportation.  In 1964, however, American automakers were witness to the unprecedented success of the Ford Mustang.  Who wouldn’t want a slice of that pie?

Rambler designed the Marlin to compete in the pony car class, but sucked at it.  It was originally based on the compact Rambler American platform, but somewhere along the way, it ended up on the Rambler Classic platform, which was bigger, fatter, and generally less sporty.  Of course, performance suffered based on size and weight, and then Rambler added a ton of expensive equipment.  Most Marlins had A/C, Power windows, automatic transmissions, and other non-essential options.  Also, the Classic platform was not exactly sporty when it came to handling.  The final product was some sort of bastard personal luxury/pony car/fastback version of the Classic.  The only thing they kept cheap and basic was the front clip.  No special treatment of any kind – just bolted on the 1964 Classic hood, fenders, and grille.

They did, however, create the first fastback midsized car in the U.S. market.  A year later, the 1966 Dodge Charger was the better looking, more successful younger cousin (design-wise).  Indeed they are similar cars.  But, you can score a Marlin for about 1/3 the price of the Charger.  And you’ll probably end up with many more sweet options. 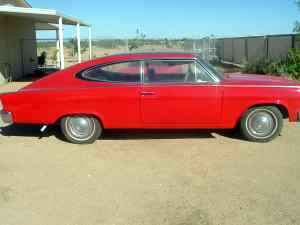 You'll be the only one.

This car is in Mesa, Arizona, and it’s itching to be sorted and cruised around your town.  Many parts from mid-to-late ’80s AMC cars, such as disc brakes, are direct swaps, so don’t let parts availability scare you off.

This entry was posted in 1960s, Uncategorized. Bookmark the permalink.