The Midget in the Crawlspace 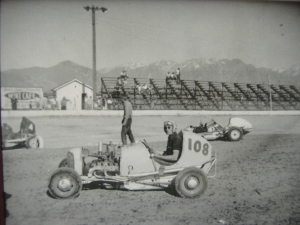 Growing up, I kept hearing mention of a midget in my Grandpa’s crawlspace. I pictured a little person eating scraps from the dinner table. Later, I found out it was actually a race car dating back to the 1940s.

Well that did it. I was enthralled. A race car? A vintage race car? In the crawlspace? This is too good to be true! Grandpa’s cars weren’t anything special. He had a nice enough 1968 Ford pickup and a 1976 Caprice that could have doubled as an aircraft carrier, but a race car?

So, I asked him about it.

“Yeah, it’s still down there. I’m going to dig it out and put it together one of these days.”
“Can I see it?”
“Ah, it ain’t much to look at.”
That was the whole conversation.

Years went by, I turned 16, bought my first car – a 1964 Nova – and forgot about the midget. But the freedom and romance of the automobile infected me. I tried my hand at drag racing for a while. I attended all the local cruise nights and car shows and swap meets. It was when I worked pit crew for a friend with a late model circle track car that I started thinking again about the midget in grandpa’s crawlspace.

So, I asked my dad about it. He said it was all in pieces down there. I supposed that made sense, as how would you get an assembled car into a crawlspace. So I pictured the engine here and the axles there and the body in pieces. Still, I never saw it. It was like some kind of force was holding it down there, keeping it secret, protecting it like some secret to the universe. Of course, this just made the intrigue all the more powerful.

Well the time finally came that Grandpa could no longer maintain his big house and his even bigger yard. He put his house up for sale, and was preparing to move into a townhouse. One day, we were selling a pile of lumber from one of his sheds when I asked him about his racing days. As it turns out, this was one of the best questions I’ve ever asked.

What ensued wasn’t a negotiation over some tucked-away car I needed to get my hands on, but a first-hand account of what racing was in the late 1940’s. Stories flowed out of him about building a car from scratch with a $10 Ford 60 V8 flathead from the scrapyard. Stories about wrapping a chunk of plywood with whichever piece of material was laying around to act as a seat. Stories about wearing leather helmets and gloves along with a t-shirt around your mouth to keep the dirt out. Stories about dirt tracks and fairgrounds and booze in the pits. To this day, I am pretty sure he was describing heaven.

Through his stories and through a bit of research, I have gained a good knowledge of what a midget was at the time.

The late 1940’s midget racer was a tiny little car. It had 12″ wheels and a wheelbase of about 70″. The bodies and frames were usually handmade, and the styles and looks were quite varied. They had mechanical brakes, operated by an external lever, on the rear axle only. The transmission was just an in/out box and a push vehicle was required to start the car. The rear end was usually a cut down model T axle and the front axle borrowed parts from the Model T as well. At the time, you could buy all the Model T donors you wanted for $15. The fuel pump was just a tank that the driver would pressurize, while driving, with what amounts to a bicycle pump. There wasn’t much more to the midgets.

They had no roll bars, no front brakes, no seat belts (they were optional). They would achieve speeds approaching 70 mph on the straightaways. According to my Grandpa, he would come home with a layer of grease covered by a layer of dirt, smelling of whiskey and motor oil. He said it was a great time.

So, why did he stop racing and put the car in the crawlspace? Well that story is more compelling than anything I had heard up to this point. It turns out that he had concerns over the safety of the sport. Given the lack of safety equipment, this made pretty good sense. He said he saw several rollovers, none of which resulted in major injuries, but that one particular crash that made him quit.

He told the story: During a race, a car got bumped and lost control. It headed toward the infield, which housed the pits. While the crowd in the pit scrambled, the car struck a dirt pile and leapt into the air. In the pits was a pickup truck and the midget was headed, airborne, right for it. The midget landed square in the back of the pickup bed. The driver of the midget was uninjured, but a man had been standing in the bed of the truck and he was killed instantly. The man was the driver’s father.

Grandpa decided to get out of the sport that night.

As for the midget in the crawlspace, I finally dragged it out into the daylight. It turns out that it was nothing more than a frame and a body. Fittingly, it now resides in my crawlspace.
I’m going to dig it out and put it together one of these days.

This entry was posted in EV Midget Build, It's Electric!, Items of Interest (Not for sale), Race cars. Bookmark the permalink.